Retroreflective sheeting is widely used to increase the visibility of road signs and markings at night. Retroreflective elements embedded into such sheeting return light from the incoming cars back to the driver and make the sheeting appear considerably brighter than the surroundings. However, many factors affect sign visibility. Overall lighting and weather conditions, brightness and contrast of nearby objects, observation angle, distance between the headlights and driver's eyes, and vision of the driver are just to name a few. Since the brightness of conventional retroreflective sheeting is limited to the amount of returned light, its conspicuity is often insufficient to meet the safety requirements.

Researchers at Lucent Optics have invented and developed an advanced retroreflective structure that modulates the brightness of retroreflective sheeting in the lights of the approaching vehicle. It can be designed to provide a flashing effect or even more complex dynamic visual effects such as image flip or animation in varying brightness.

The new retroreflective sheeting includes a bottom layer having alternating stripes of retroreflective and non-retroreflective areas and a top layer having lenticular micro-lens texture to expose such stripes to the incident light beam in succession as it is viewed from different angles. Various images, patterns or flashing sequences can be encoded and dynamically displayed in high brightness, thus making the sign highly visible and standing out among other types of signs and markings. Flashing can also be used for signaling dangerous objects or road conditions, as well as communicating encoded messages to the onboard sensors or cameras. For example, self-driving cars can use such messages to navigate roads, construction zones, parking lots, etc., and obtain additional information about the surrounding objects.

It is important that the retroreflector is completely passive and uses no energy other than the light received from vehicle's headlights. Yet, the conspicuity of road signs and markings employing such technology can be much higher compared to the steady-brightness retroreflectors and lights due to the dynamic brightness effects (e.g., flashing, blinking or animation). By helping the drivers or onboard sensors notice critical roadway signage, the dynamic retroreflectors can  help improve road safety and reduce crashes and fatalities. 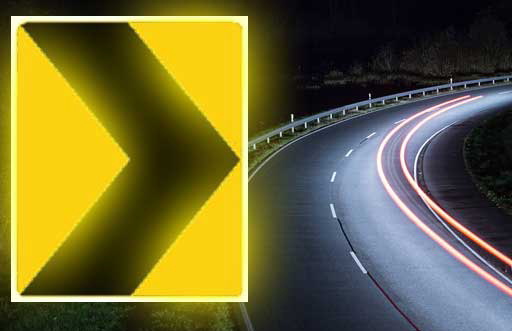